By the time that recording sessions commenced for the Abbey Road album in 1969, the writing was on the wall as far as any future for the Beatles as a continuing entity was concerned.  It is therefore common for the work released later that year to be lauded as a fitting and poignant parting shot (Let It Be was released later, but most of it was recorded in the early months of 1969).  So, from the perspective of over four decades later, were the plaudits truly warranted, or just a case of respectful wishful thinking?

A "bittersweet" but defiant quality runs through Abbey Road, although whether this has been accrued with the passing of time is open to debate.  I am in no real position to adjudicate, as the album was released shortly before I was born!

Certain aspects make this LP stand out from other albums released by the Fab Four.  The production and sound quality are markedly more lavish and "polished" than their other works.  They were now gaining access to more advanced recording technology.  Whether this makes the album sound "better" is a matter of taste, and the sheen possessed by these recordings could give rise to an accusation that the sound is a touch clinical. In fairness to the Beatles, they did not hide behind their newly acquired gizmos and equipment, and instead relied primarily on their trademark melodic inventiveness and imagination and songwriting prowess. 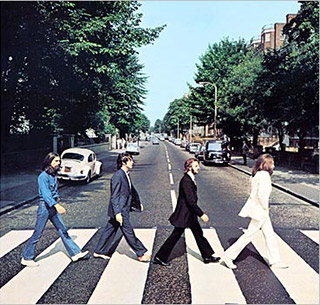 The album also witnessed the true flowering of George Harrison as a songwriter, and his two songs, "Something" and "Here Comes The Sun", have been the most enduring of the tracks on the listing. The clarity and sincerity of Harrison's writing here contrasts with the contributions of both Lennon and McCartney which, whilst substantial and important to the album's overall appeal, are beginning to diverge and possibly presage their respective solo careers to come.

Notwithstanding the reverence expressed for Abbey Road, there is some undoubted filler, although this being the Beatles it is interesting and entertaining filler!  It is a moot point whether the group members were holding some stronger material back for impending solo projects.  We know from the Anthology 3 album that some impressive songs were floating around circa 1969.

Even much of the fabled "medley" on side 2 of the vinyl album could justly described as "filler", but the group, and in particular McCartney and George Martin, expertly pull together this mixture of minor gems, vignettes and fragments, and fuse it into something vibrant, moving and enthralling.  A case of the whole being greater than the sum of the individual parts...

Partly because of the efficacy of the "medley", and also because of the diversity and quality of the other material, Abbey Road works better as an "album" in the truest sense than most of the Beatles' other work. Not quite as enigmatic and disparate as "The White Album", but much warmer and compact.  The musical ingenuity conquers all, together with the group's uncanny knack of knowing what to do, when and how, rarely if ever sounding self-indulgent or pretentious.

Abbey Road represents a brave, unapologetic and proud farewell, if it can be accurately described as a "farewell".  Bittersweet in tone, but captivating and, and one of those albums which demands to be listened to      from start to finish, in order for the full effect to be absorbed.  For this listener at least, there is never the temptation to skip tracks...

Throughout the record, there are hints and indications of what direction the Beatles would have travelled in musically, had they remained together during the 1970s.  Multi-tracked vocals and guitars, increasing use of synthesizers, more elaborate and ambitious arrangements, and of course the blossoming input of George Harrison.

On a sonic level, Ringo Starr's drumming is a revelation, sounding confident, idiosyncratic and "three dimensional".  Another hallmark of the album is the "trebly" and chiming guitar sound.  Both of these elements were doubtless accentuated by the better recording technology at the band's disposal, but as common threads they help to hold the record together.

I try not to categorise or rank Beatles albums in particular, because of the leap in musical sophistication and philosophical outlook which they made in such a short time during the 1960s, but Abbey Road is without doubt one of their most enjoyable and cohesive creations.
Posted by Glenn at 12:11