Spin-offs or sequels to celebrated situation comedies have a chequered history, to put it mildly.  However, one which merits some attention and praise is Going Straight, which followed on from the immense Porridge.

The basic premise of Going Straight was the struggle of Norman Stanley Fletcher, played by Ronnie Barker, to re-adjust and reintegrate into society following his release from Slade Prison.  However, to me the series, brief though its tenure was, was so much more than that.  Direct comparisons with its illustrious predecessor were also unfair, for several reasons.

The "situation" was one of the prime factors which made  Porridge such an endearing and effectual situation comedy.  This element is not as pervasive or concentrated in Going Straight, the arena being the big, bad outside world, and not the confines of a prison. This would inevitably mean that the follow-up would seem more disparate by comparison.  It does have pronounced virtues and hallmarks of its own, though.

The tone is markedly less outwardly comedic, and more dark, than Porridge, with much more in the way of poignancy and pathos.  I will admit that Going Straight is not always a comfortable watch, because of the predicament in which Norman Stanley Fletcher finds himself, and the vulnerability which this evokes.  The certainties of incarcertation have been stripped away, and he is at the mercy of the more varied and unpredictable vagaries of wider society.  The priority in prison was short-term bucking of the system, whereas on the outside one perhaps has to accept that the oppressive forces are too diffuse and powerful. 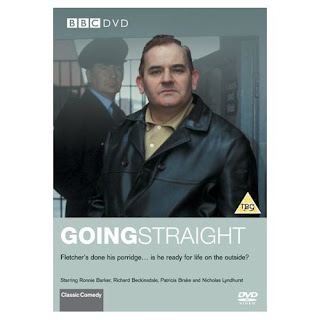 One of the great strengths of the series is its subject matter, which transcends time, and never grows stale.  Temptation, honour, dignity, perseverance, resolve, integrity and resilience are all tested and scrutinised. Despite the 1970s cultural references which abound in Going Straight, the themes raised are still startlingly relevent today.

The subject matter is, of course, expertly collated and deployed by the peerless writing team of Dick Clement and Ian La Frenais.  Their scripts for Going Straight were sharp and fresh, and possessed their uniquely appealing combination of warmth, incisiveness and empathy.

Of course, one of the departures of Going Straight was its wider diversity of major characters.  In this respect, the performance of Patricia Brake as Fletch's daughter Ingrid was particularly impressive, if under-rated. Torn between love and sympathy for her father, concern for the welfare of her wider family, and a sense of right and wrong.

To varying degrees, the six episodes chronicle the never-ending struggles of life, the ongoing battle to balance expediency with morality and integrity. By and large the righteous honest course wins out, if only just.  This ensures that some hope does at least emerge from the somewhat gloomy tenor.

We are left with a keen sense of the underlying decency of most ordinary people, trying constantly to "do the right thing", often when confronted by insurmountable odds.

One of the most intriguing sub-plots is the apparent role reversal involving Fletch and his erstwhile cellmate Lennie Godber, played by Richard Beckinsale. In prison, Fletch was the mentor, but Godber, with the advantage of youth, finds it much easier to adapt to "civilian" life.  The world has moved on, and Fletch feels left behind. In striving to overcome these obstacles, he feels tempted to resort to skullduggery in order to put himself on a more solid footing. The old chestnut about "ends" and "means" rears its head.  This time it is Godber, and other younger characters, who are dispensing the guidance and advice.

During the series, optimism and promise flicker fitfully for Fletch, as he searches for inspiration and direction.  He tries his best, but faces cynicism from others, some of which is born of a lack of understanding.  At least the series ended on a positive note, as he curtails involvement in a criminal enterprise in order to be at Ingrid and Lennie's wedding.

In portraying the changing role and fortunes of Fletcher, Ronnie Barker displayed his real versatility and mastery of characterisation.

When engineering the "set-piece" scenarios in the series, plausibility was stretched at times, with several coincidences, and old acquaintances of Fletch coming out of the woodwork in a relatively brief timescale.  However, to me this never felt really contrived, and the quality of the writing and acting always tended to win out and prevail.

Of course, further series of Going Straight were precluded by the tragic death of Richard Beckinsale in 1979.  It is intriguing to extrapolate things, and imagine how the story could have panned out. Fletch's efforts and challenges, and brushes with temptation, would doubtless have continued.  Perhaps Godber's own situation might have altered, and the "balance of power" between himself and Fletch shifted once more?

Whatever, the speculation, my view remains that Going Straight is worthy of inclusion in a list of great British sitcoms of its era.  If anything, it gets better with the passing of time...