In recent months, I have become increasingly interested in the career and life of the legendary Belgian cyclist Eddy Merckx.  I have been delighted to discover that there is an abundance of material and literature available concerning the great man.  One of the most effective and cohesive documents is the film La Course En Tete, which was released circa 1974, when Merckx was at, or around, the height of his considerable powers.

I found the film to be quite riveting, and there were several reasons for its effectiveness.  Narration in the conventional sense is virtually non-existent, save for the occasional caption or subtitle.  The pictures, sounds and music are allowed to drive the story and convey the points which need to be made.

La Course En Tete is quite an intimate piece, and it seemed almost cinema verite or "fly on the wall" at times.  Some of the footage is quite raw and spontaneous, offering an often unflinching portrayal of the life of Merckx, and the workings of professional cycling in the early 1970s.

We are afforded a close-up view, behind the glossy facade,  capturing some of the anguish, suffering and self-doubt prevalent in this sport, then and now. Another thing which jumped out of the screen to me was the contradiction of the claustrophobic atmosphere created by the intensity of competition and public adulation, working hand-in-hand with the sometimes lonely and empty existence of the professional athlete.  Merckx often seemed to be in the eye of the hurricane himself.... 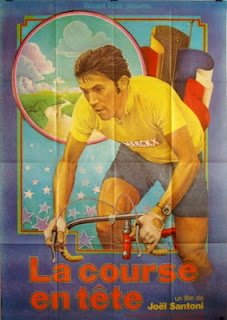 This documentary also epitomised for me the essence of 1970s sport and "popular culture".  Organic, a state of flux, the new commercial and media age co-existing uneasily with older values and practices.  It also offers a great snapshot of Continental Europe in 1973/74, and the passion which cycling, and other sports, evoke in some countries, especially Italy.

The accompanying music, almost Elizabethan in style and tone, is an inspired touch, and serves as a backbone to the entire film.  Much of the footage appears to emphasise the relentless nature of Merckx's riding style and approach, and the music perfectly complements and accentuates this.

Most facets of the life of Merckx are covered in La Course En Tete, including training and preparation, competitions, home life and media and public relations commitments.  Plenty of blood sweat and tears are evident.  The cultural and social impact of Merckx is also touched upon.

I detected little in the way of airbrushing or sugar-coating.  Some of the less savoury episodes in the cyclist's career are looked at, as are his frailties, insecurities and flaws.

Another theme which emerged was the sacrifice which he was required to make to get to the top, and stay here. Family life was one thing to be affected, and we go behind the glamour to witness the pain, the rigours and the perils of his chosen profession.

In terms of character, Merckx comes across in the film as taciturn and self-contained, ill-at-ease in some settings and company.  This would be consistent with quotes attributed to him, to the effect that he was only truly at home on his bike, as if he was born to it.

I can highly recommend watching this documentary, not just as a portrayal of cycling and one of its greatest exponents, but as an examination of an era.
Posted by Glenn at 13:48