Continuing my somewhat haphazard exploration of some of the films of Ingmar Bergman, I recently watched his 1963 film, The Silence.

This movie, quite controversial in its day, examines the tense relationship between two sisters, the story being set against the backdrop of an impending war.  The story commences during a railway journey, and then moves to an apartment in a fictitious European town.  This all allows for some rich metaphor, which it seems has been subject to varying interpretations and much debate down the years!

There is comparatively little in the way of dialogue in The Silence, which is quite apt given the apparent antipathy and tension between Ester (played by Ingrid Thulin) and her younger sister (Gunnel Lindblom).

Much of the film centres on the conflict between the "intellectual", as represented by Ester, and the sensual, epitomised by Anna. 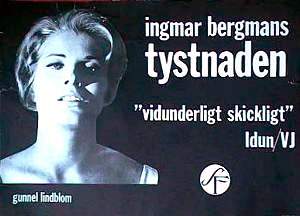 Johan, Anna's young son, seems to act as some kind of fulcrum, intermediary or interface, between the two sisters. At times, he appears caught up in the warlike emotion of the time, this perhaps symbolising also the struggle or conflict between Anna and Ester?  Much of the metaphor and potent imagery of the film is projected via Johan.

As the tale moves on, we see more clearly the nature of the relationship between the two siblings, and for me questions were posed about the motivations and genuineness of "love", and whether sometimes this is marked, plagued and clouded by feelings of possessiveness, jealousy and a need to control and manipulate.

The movie did make me think, as it touched on a few issues which have at times impinged on my own relations with friends and acquaintances.  Difficulty in seeing and appreciating the needs and desires of others, a reluctance to "let go", and a tendency to live at least partly through somebody else, rather than appreciating and  one's own vitality and "wholeness".  Can love be real and honest if we are excessively precious about how others wish to think and live their own lives?  Is love often proclaimed, but either mistaken and confused for selfishness or does it just become polluted, distorted and subverted by selfishness early on,or somewhere down the line?

I think that Bergman may also, by presenting these two divergent mindsets and lifestyles, represented by two individuals, have been hinting at the conflict and struggle which exists within us all, and our constant efforts to reconcile the two facets, and achieve a desirable balance.  The two elements often co-exist with difficulty, if at all.  A compromise, and practicality, is surely the ideal, but so seldom resolved satisfactorily in our minds....

I did not find The Silence to be as immediately satisfying and compelling a watch as some of the other Bergman films of that period which I have seen.  However, towards the end the essential hub of the story began to crystallise, and I would imagine that repeated viewings will facilitate the unpeeling of more layers, and yield greater understanding and insight.

Still a powerful and though-provoking piece of work....