There are many debates, and much conjecture, about when the modern "rock" era truly began, but there is an argument for citing Bob Dylan's 1965 album Highway 61 Revisited as one of the key staging posts.

It is often taken for granted, or taken as a given, that Highway 61 Revisited is Dylan's greatest achievement, and in historical and critical terms it probably is. It contains some of his most famous songs, and has an ambition and grandeur absent from much of his other work.

Personally, I have always found Bringing It All Back Home, released earlier in 1965, to be a more organic, rounded and likeable record, and in some respects it can be argued that it was more ground-breaking and important than the album which succeeded it.

For all its many strengths and virtues, I have somehow never fully warmed to Highway 61 Revisited. I respect and appreciate its sweep and its audacity, but I don't always find it a comfortable listen.  It feels a little over-earnest in places, and I sense that it exudes a certain smugness.  Admittedly, when the songs are this dramatic and startling, such smugness can be excused!

Dramatic and startling the songs may be, but to me they lack the fluidity and verve of those on Bringing It All Back Home.  It is possible that Dylan was aiming for something different on "Highway 61".  The tracks don't feel as tied together seamlessly, and I would describe this more as a collection of disparate, if mighty, songs than a integrated, cohesive album. 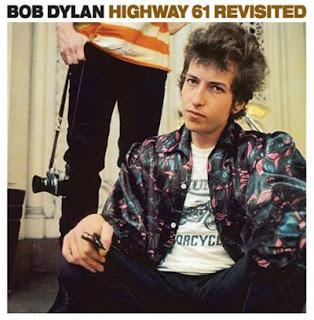 This album may not have some of the homely charm of those which preceded and followed it, but there is no disputing its overall majesty, and it does definitely possess that "wow" factor.

The opening track, "Like A Rolling Stone", is one of the landmarks of 60s rock, although it is probably no more famous than one or two of his folk "protest" songs of earlier years.  It is still astonishing to think that this song almost reached the top of the Billboard singles charts.  Driven by rhythm guitar (possibly played by Dylan himself?) and the organ of Al Kooper, it develops an irresistible momentum, as the wordplay and vocal delivery become more emphatic and daring. Each new verse adds a new dimension, and additional interest.

Just recently I heard "Tombstone Blues" described as "punk music", and I can see why.  Frantic and almost minimalist, with lyrics seemingly speaking of general disaffection and despair. After the exhilarating opening, the level drops with two less inspired tracks, "It Takes A Lot To Laugh, It Takes A Train To Cry", and "From a Buick 6".

"Ballad Of A Thin Man" is something else entirely. One of the most dramatic and intense songs on the album, different in tempo and atmosphere to the others.  Was this a message to Brian Jones of the Rolling Stones?

"Queen Jane Approximately" is an appealing if ultimately minor song, with a pleasing melody, and it is followed by the title track. These two numbers prepare the ground for a momentous conclusion to the work.

Containing some of the most entertaining lyrics on the album, "Just Like Tom Thumb's Blues" has a distinctive backing track, and a real impishness about it, which is difficult to dislike.  I have some theories about some of the words, which need not detain us here!

On to the closing number, "Desolation Row".  It can seem lyrically almost like stereotypical Dylan, with the invoking of historical characters and so forth.  However, if one really listens to it, its power really emerges.  Some might argue that it actually says little which is different from several of Bob's other compostions, but its concentrated intensity wins out. The intricate guitar backing also sets it apart.

In the end, the various minor misgivings about Highway 61 Revisited do not detract from its quality and its importance.  A superb album.