With The Beatles, the sophomore album by the Liverpudlian beat combo, was seen as a step up in polish and sophistication, if lacking some of the infectious naivete and spontaneity of the first record.

It has been observed that more time and care was taken over this one, as evidenced by the arty (and much imitated and parodied) cover design. The darker, less frivolous ambience does reflect a maturing of sorts, but in purely musical terms  the progression is perhaps only slightly discernible to the untrained ear. 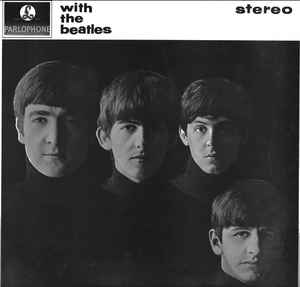 As on the debut, they start off proceedings with a strong album-only track, although "It Won't Be Long" emerges as a fairly mediocre song upon closer inspection.  It is made memorable and impactful by the taut and urgent way in which it is put together, with fine vocal interplay and meaty guitar parts.  Lots of action packed into just over two minutes, with little time to draw breath.

A trend which emerges for me is how much more measured and in control the band is on this record. Quiet confidence and a less frenetic flavour. John Lennon excels vocally throughout, and songs such as "All My Loving" exhibit a growth in musical finesse and savvy. As has been frequently pointed out, it seems remarkable that compositions of this quality could be consigned to being "mere" album tracks.

It is worth acknowledging at this juncture that the record is not uniformly strong.  There is some filler, such as "Don't Bother Me"  and "Little Child", but the running order is cleverly arranged and paced so as to make the album seem slightly stronger than it really is. Versatility is much on display, with the boys having excursions into something approaching Tin Pin Alley ("Till There Was You").

As on several of the Beatles' early albums, we are served up a mixture of original numbers and cover versions. The covers are of variable quality here, it should be stressed. The rendition of "Please Mr. Postman" is a wonder of control and vibrancy, both Lennon, on lead, and McCartney and Harrison, on harmonies/backing vocals, starring. Their interpretation of "Money (That's What I Want)", packs a considerable punch, if less immediately likeable than some of their other covers.

The version of "Roll Over Beethoven" feels rather perfunctory and uninspired, but one wonders how different it might have turned out had McCartney or Lennon taken the lead vocal. "You've Really Got a Hold On Me" is interpreted with great acuity and restraint, once again the voices blend and intertwine beautifully. The group seemed especially suited to covering songs in this style or sub-genre.

For all its status as a song which became a Rolling Stones single, "I Wanna Be Your Man" is rather turgid, and helps complete the complement of filler. It is not surprising that the lads felt no qualms about "giving away" this song to their nearest British competitors.

"Devil In Her Heart" is minor but enjoyable, with some pleasing harmonies and chord changes. The Beatles in their element in many ways.  "Not A Second Time" is a fascinating and mildly "experimental" creation which is often forgotten, but it exudes in a quiet way some of those qualities which would soon place The Beatles well beyond the reach of most of their contemporaries.

So to sum up, With The Beatles is an advance on its predecessor, even it it less enjoyable and exuberant in an immediate sense. The musicians sound less anxious to please, having surmounted some of the pressing obstacles on the first record. The signs of their more folk-rock-orientated and acoustic phase, which was only months in the future, are not really there, but this only underscores the feverish and dynamic nature of the Sixties and the Beatles' artistic development.

Email ThisBlogThis!Share to TwitterShare to FacebookShare to Pinterest
Labels: 1963, john lennon, music, paul mccartney, the beatles, with the beatles