John Keegan's book The First World War is an authoritative examination of the 1914-18 conflict. It focuses primarily on military strategy and tactics, and contains relatively little material about the "home front", or the social and economic aspects of the war.

The writing style struck me as rather awkward, and for my own personal tastes lacks a certain fluency. However, the author's grasp of military matters and geopolitics is impressive, and this gives the book its main strengths. 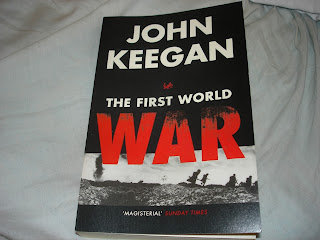 Keegan has some interesting things to say about the circumstances under which war broke out, and about the factors which generated the fear and insecurity which sparked the catastrophe. He also guides the reader through the bewildering course of events on the Eastern Front and in Russia in 1917-18. The demise of Imperial Germany is related with a suitably dramatic flavour. People may not necessarily agree with all of the author's opinions, but they are carefully argued.

A recurring lament in this interpretation is the way in which Europe ruined itself at a time when it was flourishing in many respects. Some might justifiably contend that the fall of absolutism in Central Europe was a valuable and positive outcome, but the author points to the instability and resentment which these events triggered, with dreadful consequences in the years which followed. Change was not allowed to arrive "organically", perhaps?

Some of Keegan's viewpoints about the conduct of Allied generals, and also his conclusions on certain political developments, will probably not be fashionable amongst some 21st century observers. He seems to me to adopt a pragmatic but humane approach, and at several points in the book he appears to take a stab at "abstract" theories, both military and political.

The sense of pointless waste of lives pervades these pages, as it does with most accounts of the war. A continent seemingly intent on self-destruction, although the author, as I interpreted it, attributed the root causes to the ambition and vanity of one man (Kaiser Wilhelm II), whose actions and threats prompted much of the distrust and delusive alliance-building. The regularly quoted casualty statistics are sobering in the extreme.

The final paragraph ends the book on a rather enigmatic but reflective note.
Posted by Glenn at 20:21