It is the early albums made by the German rock group Amon Duul II which tend to define their influence, their legacy and their popularity, but my listening allegiance has lately shifted decisively towards their subsequent output.

Later releases, those released between 1972-1974, exhibit more melody, additional flair, and greater variety.  They also sound less forbidding - an easier and more pleasant listen, to be honest. Their level of invention, musical intricacy and elusive mystique has proved a revelation to me in recent times. Prominent among this batch of LPs is Vive La Trance, issued in 1973.

Much of this record is eminently accessible to mainstream listeners, but the adventurous impulses remain. It surprises and disappoints me that Vive La Trance is not singled out for greater attention when their discography is being appraised. Unless I have misjudged things completely? 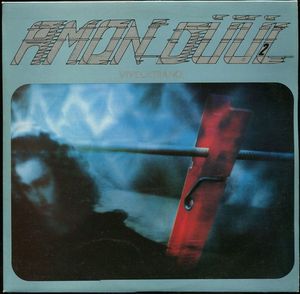 The production on Vive La Trance has a fluency and freshness which permits the music to breathe and sparkle. The greater utilization of keyboards and other instruments (saxophone, violin, cello and so forth) supplements and enriches what might otherwise have been a stodgy recipe of guitars, bass and drums.

As the opening song, "A Morning Excuse" very much establishes the tone, with its bright and rhythmic foundation. I would have to say, though, that the highlights of the album are the tracks "Fly United" and "Jalousie".  The former is a very diverting piece with several haunting melodic touches, and a highly effective vocal arrangement. Indeed, the satisfying mixture of female and male voices is a hallmark of this record. "Fly United" has an enigmatic beauty which is hard not to find captivating. "Jalousie" is a highly tuneful and seductive affair, driven primarily by a confidently expressive Renate Knaup lead vocal.

"Mozambique" is a politically charged piece, which is hardly surprising for a German "progressive" act of that period, but the lyrics are perhaps more strident and blunt than one had grown to expect from Amon Duul II. "Trap" is another one of those numbers which make Amon Duul II sound uncannily like a New Wave act of the early 1980s, with its energetic, uncluttered flavour. Those looking for more experimental fare will be catered for by "Im Krater Bluhn Wieder Die Baume" and "Apocalyptic Bore".

Another thing to mention about this album is the largely sparing and tasteful use of guitars. The laboured and heavy riffs are few and far between, and there is considerable emphasis on melodic, dynamic and intertwining guitar parts which have an earthiness, but also a delicacy.

Vive La Trance has an enchanting and beguiling air of mystery and freedom which is difficult to resist. It still sounds vibrant after all these years. Give it a listen, and you will be impressed and entertained, believe me.
Posted by Glenn at 05:26