Sticky Fingers, released by the Rolling Stones in 1971, is deserving of its place in the company of the other great studio albums issued by the group between 1968 and 1972. Of the albums from that era Sticky Fingers has the lowest emotional pull for me, even though it contains some truly great tracks, and it has also stood the test of time well.

The reason why it doesn't chime as richly as the others is that it is rather "neat and tidy". It is in fact a stylistically diverse record, but is structured in such a way that it feels very orderly. So it serves more as a collection of songs rather than an overall musical or philosophical statement. Saying that it lacks the social relevance of Beggars Banquet and Let It Bleed is not wholly fair. One could argue that Sticky Fingers reflects the jaded resignation and stagnation of the early Seventies. Whilst in the late Sixties people were seeking to change the world, or to vent their anger, by 1971 the trend was towards looking inwards or numbing the pain. 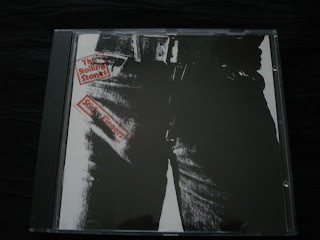 The opening number on the LP, "Brown Sugar", is one of the band's signature tunes, although I have heard it so often that its impact has become progressively dulled, and there is a danger that it can begin to feel like a self-parody or "Stones-by-numbers". Viewed objectively, it is a musical tour-de-force, although the lyrics are dated to put it kindly, regardless of how much tongue might have been embedded in the collective cheek of the musicians. Keith Richards' riffs and Charlie Watts' drumming are still worth hearing, no matter how much familiarity has eaten away at the song's freshness.

This was the first Stones studio album to feature Mick Taylor throughout as a full member, and it is noticeable how his presence and abilities augment the group's palette. "Sway" is one instance of this, his guitar prowess adding much subtlety and melodic texture, as it does on other numbers.

"Wild Horses" is one of the band's most enduring and heartfelt ballads, benefiting from one of Mick Jagger's most impressive and underrated vocals. Keith's electric guitar flourishes are very evocative and significantly enhance the mood of the piece.

I find "Can't You Hear Me Knocking" to be quintessential early Seventies Stones, at least in its early stages. The angry rhythm, the lyrical subject matter, the murky vocal harmonies in the chorus, nicely buried slightly in the mix. The closing instrumental section is slightly untypical of the Stones, but is beautifully executed, with significant contributions from Bobby Keys and Mick Taylor. These passages have a vaguely Latin feel, and are in keeping with the laid-back, "decadent" feel of much of the record.

"You Gotta Move" in some respects harks back to the stylistic territory covered by Beggars Banquet and Let It Bleed, and it is another showcase for the talents of Mick Taylor.  The song "Bitch" is so wonderfully taut, urgent and airless that it can almost pass by unnoticed. It has some nicely ragged vocal harmonies and effective brass parts.

The influence of the Stax sound is clearly evident on "I Got The Blues", most conspicuously in its horn arrangement and the organ playing of Billy Preston.  Another fine Jagger vocal here, and although overall the song is relatively "minor", it is just too good to be deemed filler.

"Sister Morphine", co-written by Mick and Keith with Marianne Faithfull, is a haunting creation, and it also sounds like a hangover from the material of the late Sixties, which is not surprising when one realizes that this version was recorded during the Let It Bleed sessions. The slide playing of Ry Cooder is a key element of the song's power. Of course the subject of the words was a theme which ran through Sticky Fingers, in one form or another...

The penultimate track on the album, "Dead Flowers", is one which I suspect divides opinion. One of the band's first overt excursions into the world of country-rock. It may be tongue-in-cheek lyrically, and to some degree musically,although not without its merits. The chorus harmonies are quite stirring, and the song helps to lighten the mood amidst the weightier and more earnest material which surrounds it.

"Moonlight Mile" deserves its reputation as one of the most effective album-closers in rock music. Atmospherically and spiritually it complements the rest of the record, and it arguably encapsulates where the wider music scene was in 1971. Mick's vocal shows some versatility and range, and strengthens the view that this album is one of those which displays his voice at its strongest and most flexible. Strings are employed judiciously, and other instrumental touches accentuate the tone and ambience of the song.

So in summary it takes a little work to absorb and appreciate the strengths of Sticky Fingers. It can be seen as a summation and a rounding up, or polishing, of what had gone immediately before. As an entity in itself it may be perceived as less iconic and "important" than the other classic Stones releases of the period, but on closer examination it is as substantial as any of them, and arguably contains less in the way of lightweight material.

The music is still earthy and authentic, but also focussed and self-assured. A very fine album.