The past couple of decades have witnessed what appears to have been a boom in "serious" sports books, the ones which the "educated middle classes" like to read and smugly refer to at dinner parties.  Indeed, the market for such books has become so saturated that it is difficult to discern which ones are genuinely meritorious, and which ones have been hyped by wishful thinking and "praise by association".

Not long ago, whilst browsing in my favourite bookshop, I noticed "Inverting The Pyramid" by Jonathan Wilson, described as a "history of football tactics", and originally published circa 2008, I believe.  I vaguely recalled it being praised somewhere in the media, and it looked like the sort of book which might actually teach me something. 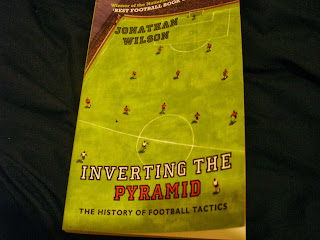 There is a real richness and immersiveness to this book, the sort of work which brims with anecdotes and insight. Like me, I dare say that most people will take very little time to read it from cover to cover. Wilson adopts a very readable and accessible style, emphasizing the nuances of his subject but refraining from indulging too much in the esoteric.

The author devotes much space not only to many forgotten pioneers and visionaries of football tactics, but also to influential events in parts of the world seldom given credit by the mainstream media.  Hence the passages documenting the innovations in the former Soviet Union, and those detailing the groundbreaking work of various coaches whose names will be unfamiliar to modern audiences. I found the chapters dealing with the "Danubian" school particularly compelling and vibrant.  The diversity of developments in South America is also explored in an illuminating way.

Another thing which I found commendable about "Inverting the Pyramid" was that it does not fall into the trap, all too common with such books, of attributing unwarranted importance to broader socio-political trends in the context of football.  Where this was clearly relevant and material then Wilson mentions it, but thankfully he presents a largely balanced and plausible picture.

There is some bemoaning of British (or more specifically, English) insularity and conservatism, but this is dealt with constructively, and the author is also quick to point out insidious and retrograde trends which occurred in other areas of the globe.

The book draws to a close by bringing the story up to date (i.e. the current millennium), and offering some thoughts as to where football may be heading in a tactical sense. Things end on an optimistic note, holding out the hope that football is going through one of its expansive and progressive phases, after a couple of decades of caution and negativity.

An enjoyable and thoughtful book, which will encourage its readers to seek out more knowledge.