The First World War continues to hold a grim fascination for many, both because of the perceived futility of the conflict, and due to the watershed in history which it represented. Much of the mainstream material about the war focuses on the Western Front, and the horrific war of attrition in France and Belgium. In English-speaking countries, little is said about the Eastern Front by comparison, even though that arena was pivotal to the origins of the war, and how it unfolded on a wider scale.

I was therefore pleased to come across Norman Stone's study of the Eastern front, originally published in 1975. A relatively short, but highly informative work, which reaches beneath the surface of this theatre of the conflict, which is treated quite sparingly and superficially in many overall accounts of "The Great War". 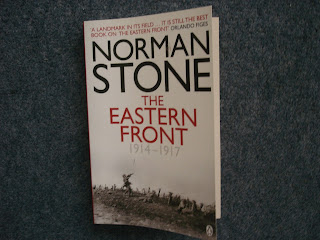 My own feeling is that some chroniclers of the Eastern Front have their assessments unduly shaped by understandable enmity towards the Tsarist and Habsburg regimes, and therefore give a slanted or distorted interpretation of events and their causes, perhaps seeking out signs of basic inhumanity where in reality ineptitude, confusion and miscalculation are nearer the mark.

In this book, Stone certainly challenges some of the popular theories about why the Russians in particular suffered setbacks at various stages of the campaigns, on the question of the manufacture and supply of munitions for example. Whilst shortages did emerge, often they were not in themselves decisive, but sometimes proved a convenient excuse to conceal or refute other deficiencies.

I was at first surprised by how much space is dedicated to discussion of logistical and industrial matters, but on reflection I can see why this is the case.  By its very nature and geography, the eastern front placed much onus on movement via strategic railways, both in terms of mobilization and swift transportation of reserves. Also, the crises in the war-effort shed some light on trends and faults within Russian society which had major implications later on. It suited some dissenters to distort the truth, in order to exploit the situation for their own political ends.

As for the Austro-Hungarians, the chaotic and dysfunctional nature of the dual monarchy is laid bare.  It is noteworthy that Stone suggests that the various nationalities which made up the empire were not overly disloyal or hostile to begin with.  Indeed, it is pointed out that the Italian campaign inspired some unity, much more so than was evident in the Russian sector, where Slav was expected to fight Slav. It was only when mistakes and misfortune started to encroach that dissent and defiance became serious and widespread. Goodwill was regularly squandered because of callousness and insensitivity.

The paragraphs concerning Austro-German dialogue are quite revealing. From a comparatively early stage, aims and agendas seemed to be diverging, an the relations and dialogue illustrated how flimsy and rotten the alliance was.  It brings to mind the German remark about being "shackled to a corpse".

Another theme running through parts of this book is how, in its own way, the Eastern Front was just as inconclusive and frustrating as its western counterpart, if different in character. Almost throughout, it was more mobile and fluid, but hollow victories abounded for both sides, the "cause" hardly being advanced, and heavy losses incurred.

There is a chapter which largely concerns itself with Romania's very sad and wretched "cameo role" in proceedings. It is a moot point whether they were "bribed"or coerced into entering the war by the Entente powers against their better judgement, but in the final analysis the outcome of the affair arguably served the interests of the Central Powers more, and created some new anxieties for the Russians.

"The Eastern Front" concludes with quite an exhaustive examination of how the economic collapse brought about the misery, turmoil and discontent which triggered the revolution in Russia. A story of growing pains, dislocation, disarray and despair.

All in all, this book was not quite what I anticipated.  I expected a chronological rendering of the military campaign(s), with diplomatic and social context added.  In the event, it went well beyond that, and enhanced my knowledge and understanding not just of events in the east, but in the war overall.

A valuable and very readable book.