Works of fiction which deal with the Cold War invariably induce a note of caution. In my experience, they have a habit of over-reaching themselves.  However, Frederick Forsyth's track record largely dispelled any such apprehensions before I read his 1979 novel The Devil's Alternative.

The first thing to make clear is that the plot is appreciably more elaborate and wide-ranging than Forsyth's other early novels, or at least it seemed that way to me. It will therefore demand greater powers of concentration and analysis, but persevere and you will be rewarded!

In a nutshell, the story revolves around a power struggle in the Kremlin, an impending food crisis in the Soviet Union, and the demands of a group of Ukrainian dissidents.  All of these factors gradually become more inter-connected, and this provides the novel with its impetus and unpredictability.  I won't give too much away, but suffice to say that an impasse develops, the solution to which involves the employment of some novel and "expedient" methods by several parties....

As this novel addresses weighty, even apocalyptic, matters, it is important that this was leavened with some characters and sub-plots grounded in more localized and personal fare.  This the author manages in his patented style, by giving over much of the early chapters in particular to a focus on individual characters and their imperatives and aspirations, rather than concentrating unduly on the rarefied air of international politics. This serves to draw in and entice the reader. 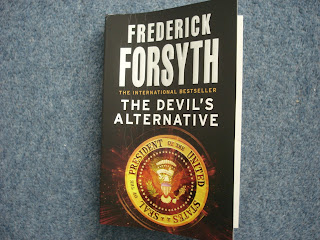 Another of the author's characteristic methods is liberally applied here too.  Outwardly mundane, everyday details such as travel arrangements and logistics, as well as personal idiosyncrasies and nuances of locations, are much in evidence, helping to give the reader an impression that he or she is looking over the shoulder of the various protagonists. This element is important here in maintaining vitality, and a balance between the "micro" and the "macro" of the picture.

Much of the dynamism and freshness of The Devil's Alternative is derived from the way in which some subjects untypical of the average novel of this particular genre (Ukrainian dissidents,Soviet grain production etc) are integrated relatively seamlessly into the overall.  Depth is added by this, and by an accompanying and authoritative attention to detail.

The multi-pronged nature of the plot also makes it genuinely unclear, for much of the way at least, exactly which way events may ultimately be heading.  As the various routes converge, the pace quickens, and Forsyth accentuates this by making the switching between "scenes" more swift and edgy, building the tension and anxiety.

I found myself being grimly drawn ever further into the tale, as the climax approached, with twists in the numerous sub-plots assuming varying degrees of relevance.  The sense of unease seemed all the greater because many of the themes explored still evoke a very contemporary ring, particularly the ecological angle, the spectre of terrorism, and the excesses of those in positions of power....