It's Only Rock N Roll - The Rolling Stones - album review

Following on from my blog post regarding the Rolling Stones' 1973 album Goats Head Soup, it seemed logical to then take a look at the record which followed immediately afterwards, namely 1974's It's Only Rock 'n' Roll.

Some of the elements merely hinted at on Goats Head Soup are developed, projected and exploited further.This record feels a touch more ebullient and gaudy than its predecessor, and less nebulous and reflective. The production is not as murky and hesitant.

The opening track, "If You Can't Rock Me", sets the tone, with its purposefulness and intensity, and the overall freshness which it exudes. It also sounds curiously "modern", as if it had been recorded in an ensuing decade, whilst still exhibiting that certain 1970s flavour and vibe.

"Ain't Too Proud To Beg" strikes me as a rather pointless and incongruous cover version, even if it is an affectionate nod to Motown etc. Those with uncharitable inclinations may insinuate that its presence on this LP is indicative of a general dearth of quality original tunes. Despite these reservations, this rendition does have some conviction about it, and the Stones always sound reasonably comfortable when performing songs in this genre. 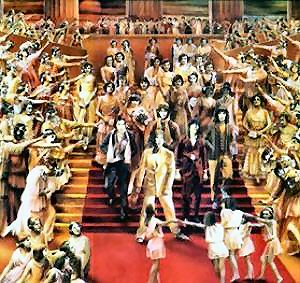 The title track, to some observers inextricably linked with its accompanying promotional video, is playful, frivolous even, but hugely infectious. Again, it displays a bite and vitality and lacks the aimlessness of some of the Stones' "rockers" of this particular vintage.

I suppose that "Till The Next Goodbye" qualifies as a "ballad", of the type which the band appeared capable of churning out almost at will. A middling melody is flattered or redeemed by acoustic guitars, harmonies and some above-average lyrics. The song gains in power and effect as it progresses.

The next number, "Time Waits For No One" carries distinctly Seventies traits, with its guitar treatments and flourishes, and a mildly unsettling eeriness. This track lingers a little too long, and becomes almost wearisome.   Musically it strongly reminds me of Stephen Stills' Manassas.

"Luxury" lends further weight to suspicions that the weaker songs were concentrated in the middle of the running order, although in mitigation it does contain glimpses of Mick Taylor's prowess and finesse, and some pleasing vocal harmonies.

"Dance Little Sister" is another prosaic if meaty rocker, largely devoid of inspiration.  The words formulaic and pedestrian also come to mind!

The quality begins to climb again when we reach "If You Really Want to Be My Friend".  An appealing and deceptively rich melody is augmented by some deft instrumental touches.  This one holds the attention well, and Mick Jagger's vocal is delivered with some pugnacity and intent.

The penultimate item, "Short and Curlies", betrays shades of Exile on Main Street, with Jagger and Keith Richards doing their joint vocal thing to considerable effect, and some diverting chord changes. Impossible to dislike....

Matters are concluded with "Fingerprint File", which is very much a rhythmic "feel" track, shining a torch on some of the excursions to be pursued by the Stones later on.  A bit of improvisation here too. The tune is just about substantial and coherent enough to prevent this descending into a meandering jam.

On reflection, it is fair to say that It's Only Rock 'n' Roll contains as much, if not more filler, than Goats Head Soup, but the better material carries genuine enthusiasm, spirit and drive, which lift it.  Even if it is artistically patchy and uneven, it is more "in your face", and feels like an "event", primarily because of the decadent sheen of the Stones circa 1973/74.  A fascinating and intriguing document and souvenir of an era....
Posted by Glenn at 17:45