I have recently resolved to re-read the works of the great German author Hermann Hesse, and as part of this process I revisited his novel The Prodigy, which has also been published under the alternative title Beneath The Wheel. 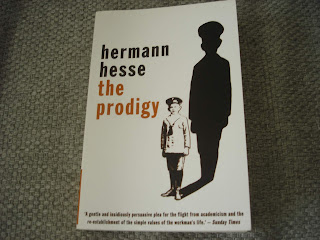 The novel tells the tale of a gifted young man called Hans from southern Germany who works hard to attain admission to a prestigious theological college, but is subject to constant pressures from his father, schoolteachers and others.  Once at the aforementioned college, he becomes friendly with a young man who questions the value of "abstract" scholasticism. Hans falls from favour with the college hierarchy, his academic performance diminishes, and he suffers from a breakdown, and returns home, eventually enrolling as an apprentice in a manual occupation.

As ever with Hesse's works, there are lots of pleasing passages concerning a person's oneness with nature, and an immersion in the simple pleasures of life. Again, in keeping with the regular Hesse style, there is not much in the way of direct social criticism, and much of his message can be found between the lines, as it were. There is the occasional slice of sarcasm, which underlined for me that the topics covered in this novel were of particular moment for the writer.

The preamble, covering the time prior to our hero's admission to the theological college, is a delight, and worth the "admission fee" on its own.

This novel is ostensibly a critique of the educational system which prevailed in the early twentieth century. More broadly, it explores themes of regimentation, oppression, the folly of some academic pursuits, and conformity as a route to stagnation and decay. Hesse extols the virtues and value of work which brings one closer to nature, which has a tangible result, and which activates and nourishes all of our senses.  For me, it brings home the necessity for a balance in our lives.

Another strand which runs through the story for me is that people should be allowed to find their own path, and that we should not let the success or acquiescence of others become the measure of our own self-esteem, value or prestige.

This is a highly affecting novel, and is to my mind one of the more straightforward and linear of Hermann Hesse's works. Although the story is told from the standpoint of early twentieth-century Europe, the issues are still relevant. Perhaps some of the ills discussed here are less "institutionalized" nowadays, but they are still pervasive and important.

Email ThisBlogThis!Share to TwitterShare to FacebookShare to Pinterest
Labels: beneath the wheel, books, hermann hesse, the prodigy