Having recently been immersing myself in appreciation of snooker's "golden age" - from the late 1970s through to the early 1990s - I decided to watch the 2016 film "The Rack Pack", a comedy-drama which is set in that era, focusing primarily on the rivalry between Alex "Hurricane" Higgins and Steve Davis.

The early portion of the movie introduces us to the two main protagonists, capturing and invoking the contrast between the freewheeling maverick Higgins and the more reserved and clean-cut Davis. The "retro" settings and stylings are surprisingly convincing, and there is excellent utilization of classic Seventies rock and pop music (Led Zeppelin, T.Rex, The Who, Thin Lizzy etc).

I must say that I was impressed and drawn in by Luke Treadaway's performance as Alex Higgins. Alright, some might argue that he is too good-looking, and that he doesn't always exude the mercurial shakiness of the character. However, he does nail down much of the famed truculence and swagger, and some of the on-table mannerisms. Kevin Bishop is likeable and entertaining in a somewhat "cartoonish" portrayal of Davis' manager, Barry Hearn. 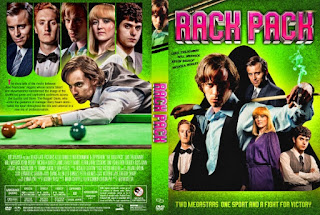 As is often the case with "biopic" type projects, facts, incidents and anecdotes are packed into a condensed timespan. Any inaccuracies and distortions here will only irritate the anoraks and those intimately cognisant of the true history and chronology. Allowances must be made for the comedy element of this production.

The snooker scenes are very realistic and credible, leaving me wondering whether the actors might have been selected for their roles because they had some modicum of proficiency at the game.

In emphasizing the contrasts in temperament, approach and playing style between the two main players, the film-makers may have slightly over-laboured the supposed "nerdiness" and squareness of the young Steve Davis. This was probably done to entrench the notion that the two men represented polar opposites.

A major sub-plot in "The Rack Pack" is the increasingly corporate and commercial nature of snooker, as orchestrated by Barry Hearn, Higgins' perceived exclusion and alienation from that milieu, and the increasing bitterness and resentment which consequently built up within him. Indeed, though this is ostensibly a work which chronicles and examines the Higgins-Davis dynamic, much of the most vibrant and penetrating dialogue is that between the Higgins and Hearn characters.

The one scene which rather jarred with me was the one featuring a nightclub "altercation" between the Hurricane and Cliff Thorburn. Did anything remotely like this actually happen in reality?  A few things like this were doubtless added for dramatic effect, like they are in many similar pictures, and they didn't really tarnish my overall appreciation of the piece.

Another intriguing sub-text is a depiction of the relationship between Alex Higgins and Jimmy White, the latter gradually inheriting the mantle of "People's Champion" from the former. The narrative seems to imply that White learned from some of the mistakes of his "mentor", being prepared to make minor concessions to pragmatism and conformity in order to fit in with a changing sport and a changing world.

The decline of Higgins is, I would contend, quite deftly, touchingly and sensitively handled in this movie. It dovetailed with one of the central messages of the film, about the "cultural" tensions and the changing of the times.  Alex played a pivotal role in creating and popularizing modern snooker, but found himself being marginalized and left behind as others prospered both on and off the table.

Overall, I found "The Rack Pack" to be an enjoyable and well-produced film. It concentrates mostly on the personalities and the human aspects, rather than the intricacies of snooker itself, and largely succeeds as a result.