In Through The Out Door - Led Zeppelin - album review

It seems to have become the received wisdom that In Through The Out Door, Led Zeppelin's last real studio album, released in 1979, is a downbeat postscript to their glittering career. However, a closer listen reveals that this is quite a strong record. 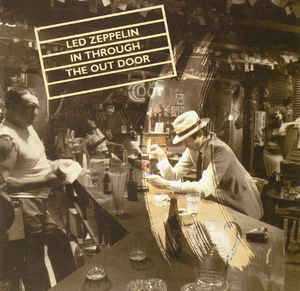 In revisiting the album, I found myself slightly afraid to poke my head in, for fear that I would be confronted with sad thoughts of an era coming to an end with a whimper. However, I was pleasantly surprised to discover how vibrant it is.  It is arguably more consistent and convincing than Presence, a patchy work which was redeemed in large part by the coruscating "Achilles Last Stand".

In Through The Out Door has a modernistic flavour, largely by virtue of the heavy use of keyboards and a warm and clear production. The sound points towards where Zeppelin music might have ventured during the 1980s. "In The Evening" embodies these sentiments, and in keeping with much of the album, it exudes confidence and no little ebullience.

In fact, most of the songs here have an energy, belief and confidence which belies the record's traditional reputation. "South Bound Suarez" is likeable if lightweight, and much the same might be said of "Fool In The Rain" and "Hot Dog". To me, these tracks represent an advance on the torpor which characterized parts of Presence.  There is some zest in the rootsier numbers, and the guys sound like they enjoyed making these recordings.

"Carouselambra" mines similar territory to "In The Evening", except that it is more keyboard-intensive. It reminds me somewhat of late 70s/early 80s Genesis.  My gripes are that it goes on too long, and occasionally the keyboards threaten to drown out Robert Plant's vocals. Again, this is a hint of where the band might have been heading sonically and stylistically...

"All My Love" is a strong and emotive song, very personal for Robert Plant, and in feel it anticipates some of his later solo material. My feeling is that the songs, melodies and arrangements are good. The ideas were there, and some thought and time was clearly devoted to them.

"I'm Gonna Crawl" possesses a kind of cinematic grandeur (heightened again by those keyboards), as well as bluesy charm. A classy way to round off what was to be the group's final proper album.

The impression is that Robert Plant and John Paul Jones dominated things creatively, and the relative absence of guitar pyrotechnics is conspicuous.So, on reflection, this is a fine album, albeit not a traditional Led Zeppelin one.