Bringing It All Back Home - Bob Dylan - album review

First, it exudes an aura of restrained cool and quality, with an immediacy and confidence which is rare indeed. Secondly, it represents a perfect mixture of styles and themes, creating a richness of texture absent from the other two of the aforementioned trilogy. Thirdly, it contains more genuinely memorable and substantial songs than the other two.

It is all here - the beginnings of folk-rock, the lingering elements of protest, oblique lyrics, inspiring imagery. The profound, the amusing, the angry, the inspiring and the touching all within these eleven compositions. The fact that the album encompasses so many directions, from the "hipster" appeal of "Subterranean Homesick Blues" to the languid charm of "She Belongs To Me", to the revelation of "Mr Tambourine Man", is part of its impact, in addition to the quality of the execution.

There are still clear remnants of Dylan's "folk-protest" past on songs such as "Gates of Eden" and "It's Alright Ma (I'm Only Bleeding)", and if anything these tracks assume a greater resonance, power and venom, surrounded as they are here by numbers with very different subject matter and agendas. I am sometimes tempted to regard "It's All Over Now Baby Blue" as a kind of hinge in Dylan's career, closing the door on one era, and peering into another.  I may be incorrect in this assessment! 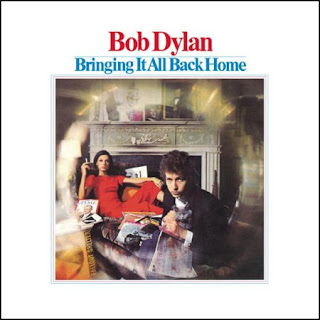 The sound on Bringing It All Back Home has an uncluttered, clear quality which gives it part of its accessibility. The more dense, murky feel of later albums is thankfully not evident here. Dylan's vocals are projected quite forcefully on many songs.  This was also the stage at which the "bluesy" songs still sounded original and distinctive, and not samey and stodgy.

It is some measure of the standard set by Bringing It All Back Home that it could be argued that Dylan tried too hard in struggling to surpass it.  I feel that Highway 61 Revisited, excellent though it is, sounds over-earnest and contrived in comparison. Was Bob hamstrung by the artistic brilliance and spontaneity of his first album of 1965?  Did the pressures, personal and professional, which caught up with him not long afterwards partially stem from this?

In addition to its other properties, I also find Bringing It All Back Home the most enjoyable of Dylan's classic albums.  It is an accomplishment indeed to be able to combine the cerebral with a pure entertainment value with this facility. The albums which followed never quite managed to achieve the same balance to this extent.

Listen to this album.  You will be entertained, amused, challenged and inspired.....